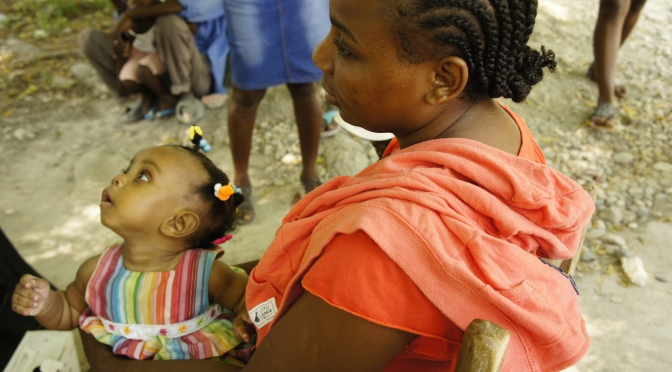 To Fool the Rain: Haiti’s Poor and Their Pathway to a Better Life by Steven Werlin

“Helping families lift themselves out of poverty means helping them build income and wealth, but it is a social phenomenon as well,” wrote Steve Werlin, the author of To Fool the Rain: Haiti’s Poor and Their Pathway to a Better Life. “And one of the social change we try to effect involves working on the way members look at themselves.”

It is quite impressive how someone’s mind and attitude can alter and reset the course of one’s life. However, in order to eventually arrive at that mind reset some people require a substantive hand out, constant observation and follow-up; not simply a prescriptive hand up. When looking at the lowest income countries in the world like Haiti a vast array of NGOs work to alleviate some of its inherent problems with programs that address the root of poverty. Some provide work programs, educational programs, health care, or even microloan programs. But some of Haiti’s families are so extremely poor they cannot dream of qualifying for many of these programs because they have virtually nothing. In fact, they live in such cyclical poverty they cannot feed themselves on a daily basis, or even every other day. In Haiti’s deepest far reaches and unfathomable rural areas are families who live in abject poverty far away from roads and towns. They require the most cumulative social programs designed by worldwide NGOs that specialize in the nuances of poverty reduction and eradication.

In Haiti, for example, one of those social programs is called “Chemen lavi miyo (CLM)” in Creole or a Pathway to a Better Life that is run by Fonkoze, Haiti’s largest microfinance organization. Even as a microfinance enterprise Fonkoze realized that to reach the poorest Haitian families means to provide overarching programs that teach rural women who qualify for their CLM program financial and entrepreneurial skills as well as life and relationship skills.

It is never easy to turn poverty on its head and declare it eradicated in areas where it has ensnared families for generations. In many countries, NGOs provide poverty relief aid to women in order to stabilize poverty-stricken communities. NGOs, like Fonkoze, rely on women rather than men because they have learned through decades of observation and sheer data that a woman will use her newfound micro wealth for the benefit of her entire family an extended community. This aid in the form of housing, food money, and animals (assets Fonkoze gifts to these women) typically cause cultural standoffs as men are traditionally seen as breadwinners and heads of a household. Women who seek to better their family’s lives can experience violence (both mentally and physically) by husbands, fathers, and boyfriends who believe they are inherently entitled to a woman’s assets whether it is a few goats and yard fowl or a cow, house, a money she has stored and saved away.

To Fool the Rain highlights the life transformations of women and their families who have been a part of Fonkoze’s CLM program with impressive results. According to the statistics, 95% of the women in the program graduate, but it is never easy. Some of the women face long-held family resentment once they enter the program. Others face jealous neighbors, and there are some women whose husbands secretly resent their wives’ newfound financial independence. Some of the women face health scares and even death. Fonkoze expertly works with these women for 18 months to put them squarely on their feet despite the many challenges that await them as told in the stories by Werlin.

To Fool the Rain is a book for those who work in the development sector who need a renewed sense that there are programs that do work. It is for students who long to work in development, but need the harsh truth before setting foot in a country like Haiti. It is also for those who want to read stories behind poverty statistics and want to know what everyday life is like for the poorest of the poor in Haiti. It is for those who need a new way of thinking about how to work with the poor and the sacrifices one must make in order to reach them in the most rural areas only accessible by foot. It is also for those who need renewed faith that there are indeed various ways to help people out of poverty and the first step is to start with addressing their everyday needs: food and shelter and a way to make a living. It is also a written testament to women who work tirelessly to see that their lives and their families’ lives change given a rare and beautiful opportunity.

View all my reviews